Switzerland has become a global fintech center with Zurich and Geneva in particular emerging as world-renowned fintech hubs, according to a new report by the Institute for Financial Services Zug IFZ of the Lucerne University of Applied Sciences.

The thriving Swiss fintech industry has been supported by “excellent general conditions for fintech companies” including the political stability and the progressive regulatory environment, according to the IFZ Fintech Study 2018.

However, several improvements can be made. Among the main drawbacks, the report cites the high labor costs and living costs, the low level of tertiary enrolment, and the lack of online governmental services.

2017 was the year that the Swiss fintech sector matured, according to the report, with fintech becoming widely acknowledged as an important innovation drivers and startups penetrating the financial system on different levels.

The last months have seen a variety of cooperation and partnerships in the financial sector. These include partnerships between Crowdli and PwC, Contovista and Raiffeisen, Descartes and Deutsche Asset Management, Raizers and Banque Piguet Galland, True Wealth and Basellandschaftliche Kantonalbank, Squirro and Synpulse, Payrexx and WIR Bank, and Veezoo and AXA, among others.

2017 was also marked by the emergence of the Crypto Valley in 2017 in the city of Zug, which is now widely recognized as a global hub for cryptocurrency and blockchain technology.

“The combination of the good conditions in Switzerland and the clustering of innovative entrepreneurs, a business-friendly administration and the presence of leading research institutes in and around Zug, resulted in a lively and self-enforcing ecosystem,” it says.

“This in turn allows Switzerland to profit from the global [initial coin offering (ICO)] boom, as it is one of the leading places globally in terms of capital raised through this alternative form of financing.”

Besides the large growth in the ICO volume, the traditional venture capital volume invested in the Swiss fintech sector also increased significantly in 2017, amounting to a total of CHF 130 million. 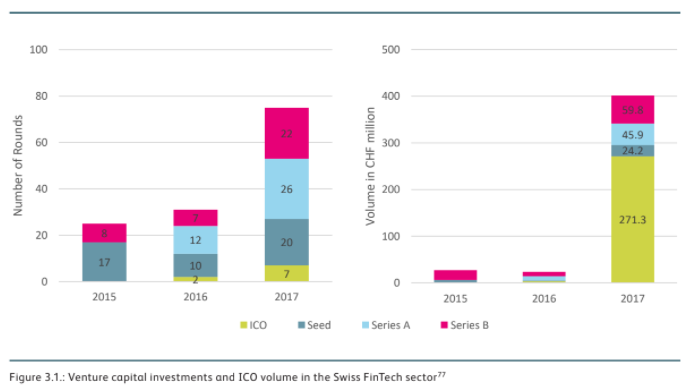 Some product areas have grown more than others. For instance, the number of companies in the blockchain and investment management spaces has increased in the last year. 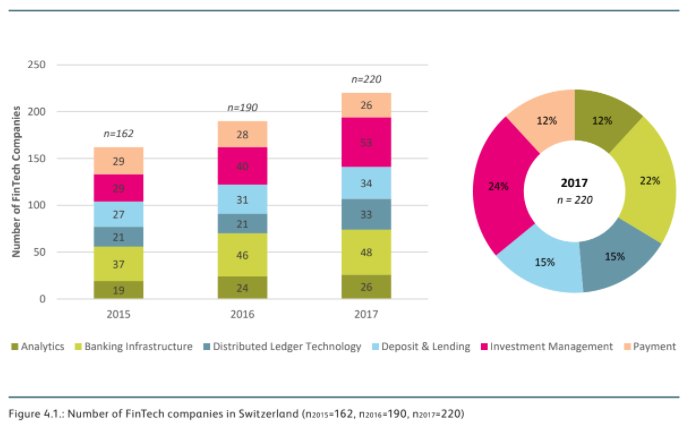 Startups surveyed cited finding customers as the most pressing challenge, followed by the availability of skilled staff or experienced managers. On the other hand, access to financial capital does not pose a major problem to most fintech companies. 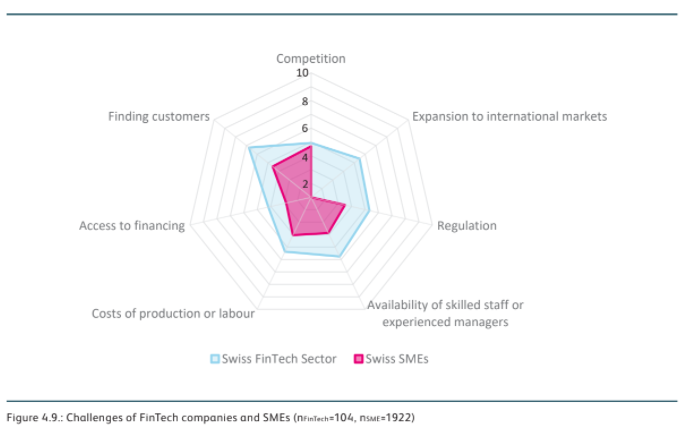 In 2018, growth is expected to continue and the maturity level is set to increase, leading to higher company valuations, additional jobs in the sector, and consolidation in some fintech product areas.

According to a report by EY, only 30% of Swiss residents regularly use fintech solutions for money transfers and payments, financial planning, savings and investment, borrowing, or insurance. The global average for the adoption of fintech solutions is slightly higher with 33%. Emerging markets such as Brazil, China, India, Mexico and South Africa have an even higher adoption rate of 46%. 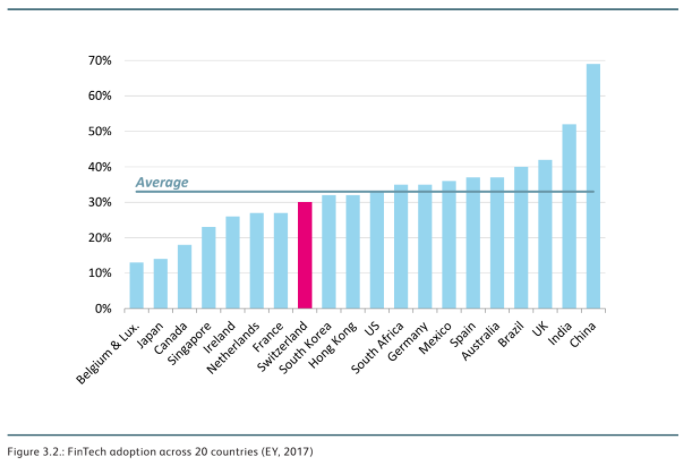 Fintech in 2017: The Competition of Innovation Jams, Fintech 3.0