Robinhood, a major American brokerage known for being the first company to offer zero trading commissions for US listed stocks as well as zero account minimums, is planning to launch in Europe as the company seeks for a “Chief Executive to lead and operate [its] planned UK/EU expansion,” according to a new job listing.

In May 2015, the company triggered its global expansion following a US$50 million round of funding led by New Enterprise Associates (NEA), announcing Australia as its first international market. Robinhood has since been waiting for its regulatory approval.

Launched in 2013, the Robinhood app lets users invest in publicly traded companies and exchange-traded funds listed on US exchanges without paying a commission. Since its inception, the app has quickly gained traction notably with the demographic Millennials which accounts for 80% of current customers.

Its mission, it claims, is to make financial tools accessible to everyone, as well as inspire a new generation of investors.

“Most stock brokerages out there have been around for 30 years, their interfaces are clumsy, and they’re targeting older professionals and active traders,” Vladimir Tenez, co-founder of Robinhood, told Techcrunch.

“They’re no place for first time investors and that’s one of the things we focus on. Making it accessible. Having it be mobile friendly.”

According Jan Hammer, a partner at Index Ventures which has invested in the company, Robinhood has “not just made trading simpler, mobile and free; by doing so, they’ve opened up stock trading to a generation of Millennials who have largely stayed clear of the stock market,” Hammer told Business Insider.

As of January 2016, Robinhood had enabled users transact over US$2 billion, according to Forbes.

The Robinhood app, which the team has put a lot of effort into the design and the convenience, won an Apple Design Award in 2015. The interface is both minimal and stylish. 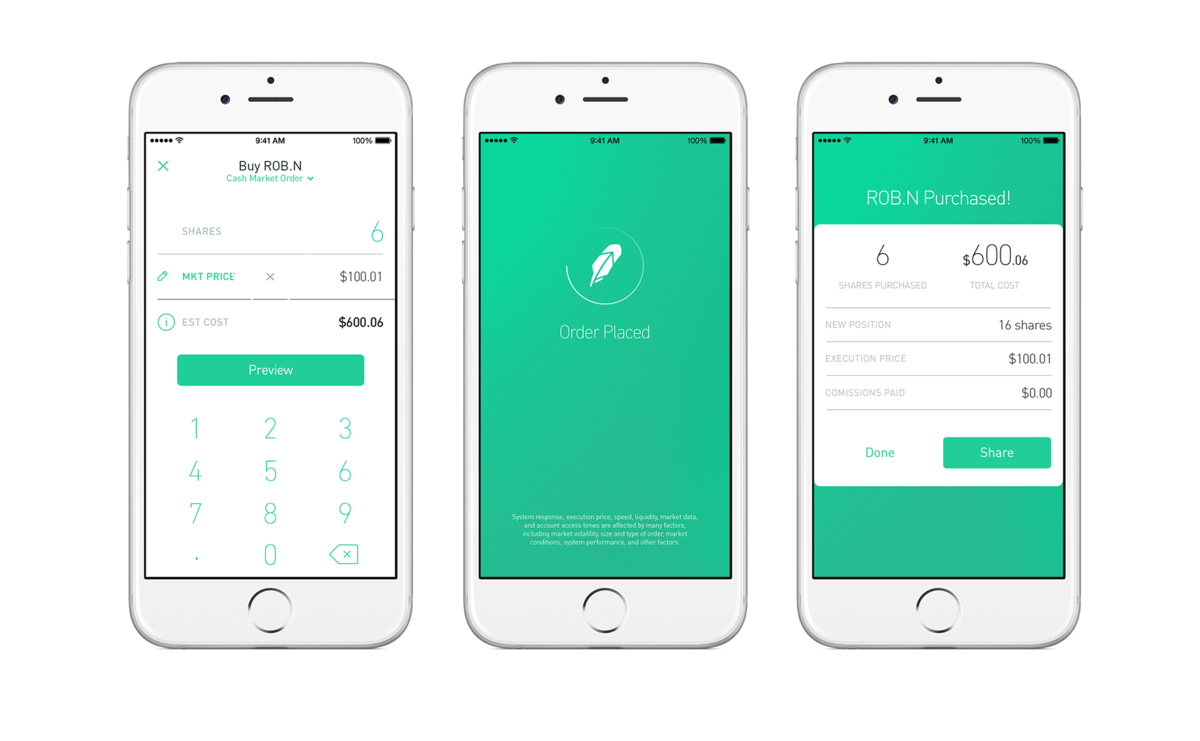 To start trading, users first need to link their bank account and credit their Robinhood account by a one-time transfer.

Once the amount is deposited (which usually takes about three days in the US), the home screen shows you the total money – in stocks and cash – and how much you’ve earned throughout the past 24 hours.

In Europe, London-based online brokerage iDealing has recently followed the lead of Robinhood and decided to remove brokerage commission for stocks listed on the Dutch, French or Belgian Euronext markets, becoming in December 2015 the first online brokerage to offer commission-free trading in the continent.