The current e-government situation of Switzerland is stuck in an “intermediary phase” of implementation and harmonization, according to a new report. In particular with regard to user-friendly electronic identification and Internet voting, Switzerland is still struggling. 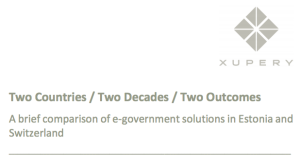 According to a report by xUpery, commissioned by Procivis, Switzerland is standing at a point where it must proceed firmly towards robust, but costly, e-government solutions that are promising in the long term in order to avoid stagnation in its e-government advancement.

But despite the challenges, there is still plenty of potential for the development of innovative solutions in Switzerland – even in an environment with many difficulties. The Swiss system has the main advantage of offering a “testing environment” for different e-government technologies, but the downside is slower speed, the report says.

The report, released on January 24, 2017, provides an update on the implementation of e-government in Switzerland and examines the current stage in this process. It compares the state of e-government in Switzerland and Estonia, where relevant solutions are enabling efficient administrative procedures for its citizens and unique possibilities of political participation. Furthermore, Estonia’s e-government infrastructure provides an environment for business innovation with e-residency, for instance, the report notes.

Estonia, a tiny 1.3 million population country, has emerged as a global leader in e-government, thanks to major push by the government through a movement referred to as e-Estonia.

e-Estonia, which aims to facilitate citizen interactions with the state through the use of electronic solutions, has created a more connected society and established the capital city of Tallinn as an innovation hotspot. Digital services created under the initiative include i-Voting, e-Tax Board, e-Business, e-Banking, e-Ticket, e-School, University via Internet and the e-Governance Academy, among others.

According to journalist Jeremy Epstein, the move has not only allowed the government to reduce expenditures by 2% of gross domestic product, it has also given rise to “one of the world’s most entrepreneurial and innovative countries, with the second-largest number of startups per capita.”

But the e-Estonia initiative goes well-beyond bringing schools online, enabling e-voting and equipping all inhabited areas with free wifi network. In December 2014, the e-Residency move was launched to offer electronic residency to people from outside the country, a step that the Estonian government qualifies as “moving towards the idea of a country without borders.”

As of Switzerland, the experiences in different e-government fields have so far revealed that it is difficult to change the implementation and legislation procedure in Switzerland unless there is a clear political consensus.

Among the key difficulties and hindering factors, the report points out that the federal nature of Switzerland, which has a number of downsides: finding political consensus takes longer; it involves more stakeholders and government levels; the development and introduction of standardized technological solutions are more difficult, happen at a slower pace, and frequently, the outcome is the co-existence of different and competing systems.

In 2007, the Swiss Federal Council adopted the first e-government Strategy Switzerland, the first step towards an integrated, nationwide form of e-government. It sought to reduce administrative burdens through process optimization, standardization, and the development of common solutions.

The strategy was later revised and a new plan was adopted by the Confederation, the cantons and the communes at the end of 2015.

Among the key operational objectives of Switzerland’s e-government plan for the years to come, the country plans to have:

Featured image by dencg via Shutterstock.com.