Global Fintech Fundraising Fell in First Half of 2019, Germany Fintech on the Rise, Fintech China on Halt

Global investment in fintech ventures fell sharply in the first half of 2019, as fundraising and deal activity in China that had soared a year earlier ground to a halt, partially offsetting strong gains in the U.S., U.K. and several other European countries, according to Accenture  analysis of data from CB Insights, a global venture-finance data and analytics firm.

The total value of fintech deals globally in the six months ended June 30 was US$22 billion, compared with US$31.2 billion in the same period of 2018, a decline of 29%. The drop was due mostly to the lack of a giant deal like Ant Financial’s record US$14 billion fundraising in May 2018. Discounting that transaction, global fintech investments would have climbed 28% in the first half of 2019 over the same period last year.

The value of deals in the U.S. in the first half of 2019 jumped 60%, to US$12.7 billion, even though the number of transactions was virtually unchanged from the first half of 2018 (564 vs. 563), signaling a trend of larger deals in the world’s biggest and most active fintech market. The largest portion of funding, 29%, went to lending startups, followed by those in payments, with 25% of the total. The largest deal was the US$1 billion that consumer finance fintech Figure Technologies Inc secured from a credit facility in May.

Fintech investment in the U.K. nearly doubled, to approximately US$2.6 billion, and the number of deals jumped 25%, to 263, as challenger banks and payments companies continued to draw investors’ interest. For example, Monzo raised US$144 million in June; Starling Bank raised US$211 million from two separate transactions in February; money-transfer startup TransferWise closed a US$292 million deal in May; and WorldRemit raised US$175 million in June. 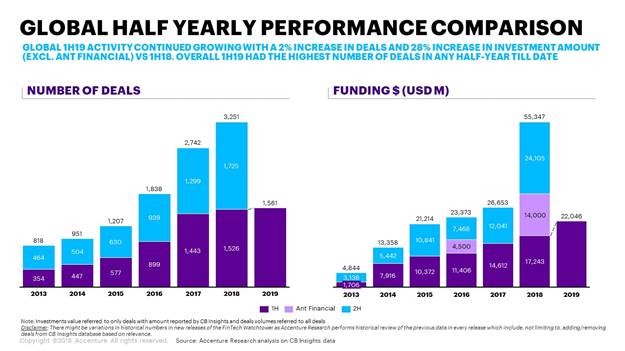 Other European markets also made big strides, with investments in German fintechs more than doubling in the first half of 2019, to US$829 million from US$406 million in the same period last year, led by the US$300 million that challenger bank N26 raised in January and the US$125 million investment in insurtech Wefox Group in March. Fundraising in Sweden more than quadrupled, to US$573 million, while fintechs in France raised US$423 million in the first half of 2019, 48% more than a year earlier. 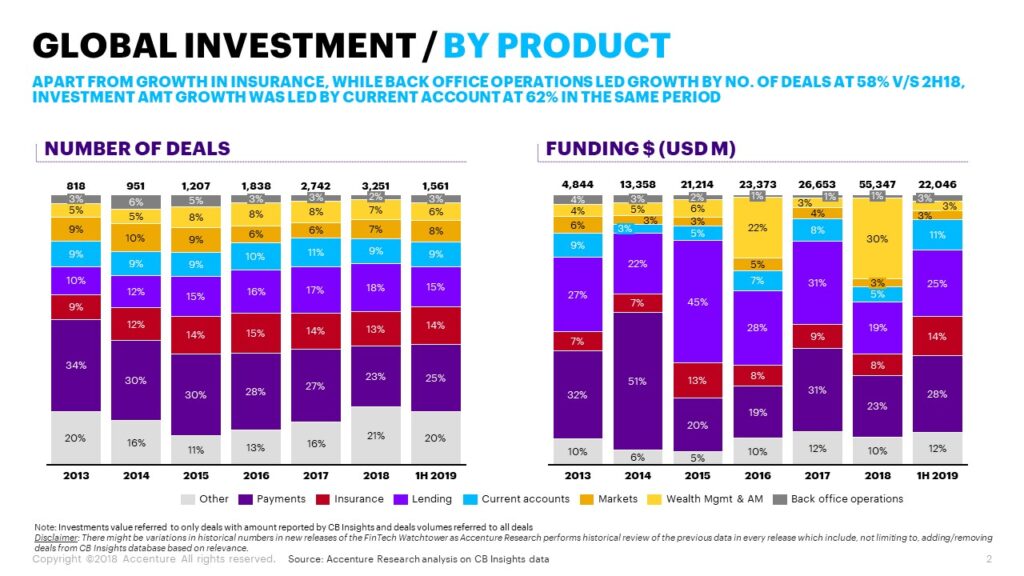 Investments into payments startups and those in lending took the bulk of global fintech fundraising, accounting for 28% and 25% of the total,respectively, while insurtechs raked in 14%.

The number of fintech deals globally rose about 2% from the first half of 2018, to 1,561, but activity was mixed in the world’s largest markets. While the number of deals was flat in the U.S. and rose sharply in the U.K., China and India experienced volume declines of 49% and 21%, respectively.

But these were offset by higher volume elsewhere, including other parts of Asia — with Singapore and Japan seeing the number of deals increasing 55% and 33%, respectively — and in Europe, with the number of deals doubling in Sweden, to 40, and rising 27% in Germany, to 56.

Apiax and Pushfor Go Live on the Temenos MarketPlace