Changing behaviors and preferences from Millennials combined with the emergence of technologies such as the Internet of Things (IoT), is pushing the insurance industry towards massive disruption, according to a new report by Capgemini and Efma. 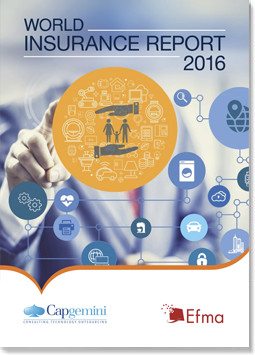 The report, which aims to identify the threat pushing the insurance industry toward disruption, suggests that the competitive threat from technology firms is growing rapidly.

Capgemini argues that technology, retail, e-commerce and non-banking financial institutions (fintechs) are entering into the different parts of the insurance value chain, naming the likes of Google, Walmart, and Amazon. Aware of the threat, 40% of insurers said they considered Google as a potential rival.

In a separate report called “Top 10 Trends in Insurance in 2016,” Capgemini writes:

“Non-traditional firms can leverage their data mining power, huge customer base, and capital availability in the insurance business and they are entering into the industry with partnerships, alliances, join ventures and acquisition.”

For instance, Google and Walmart have partnered with comparison sites to offer auto insurances in the US.

In 2012, Google launched an online insurance comparison site in the UK. Google Compare is a comparison-shopping site that lets users compare rates from different insurance providers. The firm’s insurance partners include Mercury Insurance and MetLife, as well as local providers.

Another example is IKEA, which has started selling insurance products in the healthcare segment for children and pregnant women. The company has rolled out trial products for a range of policies at selected stores, with a plan to target 2.5 million members of its loyalty club in Sweden.

The insurance business, Millennials and the Internet of Things

Globally, 47% of all customers have positive experiences with their insurers. However, the number drops to 34% for Gen Y or Millennials.

Gen Y and affluent consumers are more demanding in the way they connect with their insurers.

Findings suggest that Gen Y customers use social for insurance needs at least one a month, and interact with their insurers up to 2.5 times more on social media than other customers, and over two times more via Internet-mobile channel.

Millennials are also likely to purchase insurance products from tech firms, compared to older customers. This trend is even more visible in emerging markets such as Latin America (49%) and Asia-Pacific (47.2%).

According to John Mullen, Corporate Vice President and Global Insurance Leader for Capgemini, “Gen Y is clearly indicating that they do business differently and these insurers who respond to them on their terms will have a clear competitive advantages.”

Mullen said that if insurers don’t provide adequate engagement for their digitally-advanced customers, they will likely push these consumers towards new market entrants and non-traditional technology-driven competitors.

Another trend that is expected to shake up the insurance industry is the coming wave of connected technologies such as wearable devices, machine-enabled drones and robots, the report says. These IoT technologies will likely transform everything from the way insurers connect with their customers to their fundamental assessment and management of risk.

That being said, insurers are still underestimating their disruptive potential. Only 16% of insurers believe that customers will embrace driverless cards, for instance, while 23% of customers express interest. Along the same lines, 50% of customers that are both affluent and Gen Y, said they were likely to adopt connected technologies.

These connected technologies should increase risk transparency, leading thus to the emergence of new business models, especially in pricing and risk control, the firm predicts.

To stay relevant, insurance companies must prepare themselves, start leveraging technologies, and significantly change how they assess and manage risk. They will also need to streamline processes, build data and analytic capabilities, improve their value proposition and services, and establish strategic alliances.