Deloitte has announced its selection of this year’s 50 fastest-growing technology companies in the UK, naming digital banking unicorn Revolut as the top tech company.

Deloitte’s 2019 UK Technology Fast 50 awards recognize and rank the top 50 tech companies in the UK based on the last four years of revenue data.

Fintech unicorn Revolut emerged as the overall winner, generating an average three-year growth rate of 48,477% to the year 2018/2019 – the fourth-highest growth in the history of Deloitte’s UK Fast 50 competition.

Revolut claims more than 8 million customers with some 600,000 people opening accounts every month. In September, the company announced that it had signed a new deal with Visa, enabling it to expand to another 24 countries.

Revolut has also signed a deal with Mastercard which will be its card issuer when it launches in the US later this year.

In October, Revolut launched in Singapore and announced that it was looking to raise US$1.5 billion and had hired JP Morgan to facilitate this. The fundraise would value Revolut between US$5-10 billion.

With 15 companies, fintech comprises 30% of this year’s 50 winners. Among the top ten, six are fintechs. They are ClearScore (5,363%), a business that gives UK customers free access to their credit score and report; Lendable (4,755%), an online personal loans platform; and Onfido (2,855%), an identity verification startup. 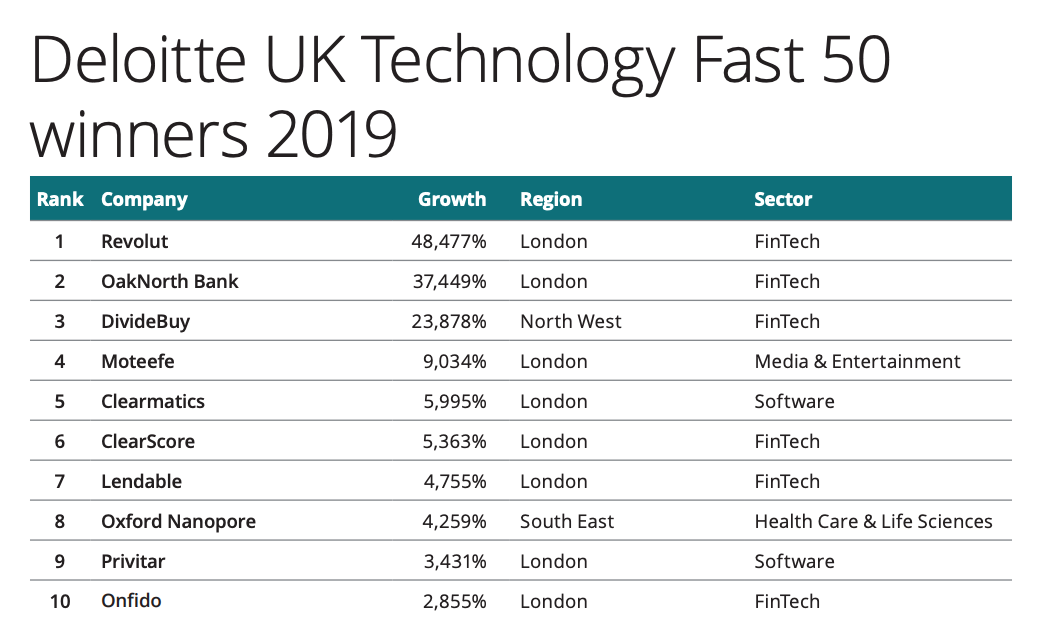 Other fintechs that made the 2019 UK Technology Fast 50 list include:

Despite facing a period of uncertainty, the UK tech sector continues to thrive. The UK now has 16 unicorns and remains firmly established as a leader on the global tech stage, the report says.

In 2018, UK tech companies raised GBP 6.3 billion, more than any other country in Europe. Additionally, programs such as the Fintech Bridge Programme, which helps UK fintechs expand abroad, are supporting domestic tech companies.

Software businesses made up the largest proportion of winners at 48%. The sector is led by Clearmatics, a blockchain business building decentralized network platforms, which ranks 5th.

London-based tech companies dominate the list, representing 64% of the 50 winners, and 13 out of the 15 fintech winners are based in London. This showcases that the capital continues to be the heartland for the country’s leading tech companies, and particularly fintechs, the report says.

Santander Invests £350 Million in an FX Facilitator for SME

Can Germany Overtake The UK As The No 1 Fintech Location In Europe?