London-based fintech startup Revolut has launched a new banking product targeted at companies in the UK and Europe. The company said that over 12,000 businesses had pre-registered to participate in the program prior to the public launch. 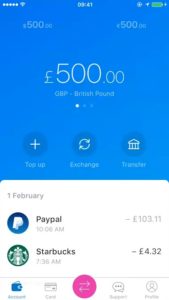 Revolut for Business enables companies to sign up for a multi-currency account, and hold and transfer money across 25 supported currencies at the interbank exchange rate. A MasterCard contactless corporate card is also issued to business end users. No fee is charged for transactions when it is used abroad to make transfer between fellow Revolut clients.

Three packages are currently available to business clients. These range from £25.00 to £1,000 per month, with the first month free.

The company plans to add more features in the future including free and instant money transfers between companies that are signed up to Revolut for Business, real-time spending notifications, and dedicated customer support.

Revolut to launch in Switzerland “in a few weeks”

In a tweet shared last week, Revolut said that it planned to launch its full services to Swiss users in the coming weeks. 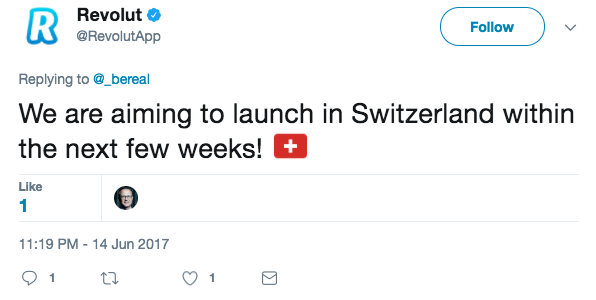 In November 2016, Revolut cancelled all cards for Swiss residents citing a “request from our issuing partner.” Swiss customers voiced their frustration on the Revolut community forum and social media. “This is such a disappointment,” said one user. “I spoke highly about Revolut in the past but how they treat the customer starts to bug me,” said another.

In a message sent to customers, the company explained:

“We expect this to be a temporary measure whilst we migrate to a new issuing bank at the beginning of next year, alongside adding CHF and a number of other top-up currencies. The good news is that you can still top-up and use your Revolut account to exchange and transfer currencies globally at interbank rates.”

Despite the card interruption, Revolut has been able to provide all the in-app features to Swiss users including signup, top up, exchange and transfer money services. 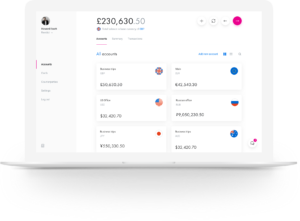 Since launching to the public in July 2015 as a peer-to-peer payments and money transfer app, Revolut has significantly expanded its portfolio to encompass current accounts and fast loan deals. Today, the startup serves over 650,000 customers.

“Revolut has literally reinvented the way in which people spend and send money abroad, and so launching a business service was the next logical step for us,” said Nik Storonsky, founder and CEO of Revolut. “We can apply the same innovation to help businesses across the UK and Europe eliminate unfair banking fees.”

Prior to Revolut, Storonsky worked as a trader at Credit Suisse and Lehman Brothers. He launched the startup with Vlad Yatsenko, former Credit Suisse and Deutsche Bank developer, and Tom Reay, former developer at Expedia and Ocado, and quickly raised US$3.5 million from investors such as SeedCamp and Balderton Capital.

Revolut launched the Current account functionality in February, and began offering credit through a partnership with Lending Works. The recent launch of the Business account complements the startup’s banking services offering and signals a broader desire to expand beyond the money transfer business to become a neo-bank.

Money transfer platform TransferWise triggered a similar push this year with the launch of the Borderless account last month.

TransferWise currently offers account numbers for the UK, Europe and the US and lets users store money in 15 other currencies. The product is aimed at freelancers and small companies who do business across borders or in multiple currencies.