The small Mediterranean island of Malta is quickly emerging as a popular location for entrepreneurs to set up blockchain and cryptocurrency businesses, thanks to the country’s supportive government that sees the industry as an economic opportunity to create regulations favorable to the growth of the sector. 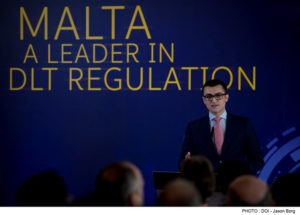 The proposed legislation is likely to make Malta the first country in the world to fully regulate companies operating in the blockchain industry.

“The document put forward for consultation is the base for the creation of a new economic sector that will be a great contribution to Malta’s economic growth,” said Schembri.

“A new industry, potentially as large as the iGaming industry, and capable of creating thousands of new jobs, will compliment and reinforce other sectors and act as a catalyst for the creation or development of new economic sectors such as supply chain management and fintech.”

The government is in the process of formalizing a Virtual Currency Act that will pave the way for an auditing framework made specifically to regulate blockchain-driven investment operations such as ICOs. It will include a so-called Financial Instrument Test to clearly define when assets derived from ICOs are securities.

Although the public consultation is still in process, many startups and token issuers have already chosen Malta to open up their business.

Binance, the operator of one of the world’s largest cryptocurrency exchange platforms, announced its intention to set up operations in Malta in March.

Binance cited the country’s “existing pro-blockchain legislation and the stability that it offers financial technology companies through its regulatory framework” as the reasons for opting for Malta.

“After meeting with Parliamentary Secretary, Mr Silvio Schembri, […] and reviewing a proposal bill, we are convinced that Malta will be the next hotbed for innovative blockchain companies, and a center of the blockchain ecosystem in Europe. Binance is committed to lending our expertise to help shape a healthy regulatory framework as well as providing funds for other blockchain startups to grow the industry further in Malta.”

Similarly, Hong Kong-based cryptocurrency exchange platform OkEx said earlier this week that it will be expanding to Malta and working with the government to help establish the regulatory framework.

According to a research by Bloomberg, Binance makes nearly US$3.5 million in daily revenue, while OKEx generates about US$1.25 million per day.

Neufund, a German startup developing an equity fundraising platform on the blockchain, said in April that it will be establishing presence in Malta and help the government develop its regulatory framework.

Poland’s largest Bitcoin exchange BitBay is the latest startup in the space to unveil its upcoming relocation to the island stating earlier this week that after many months of research it has concluded that “the choice of Maltese jurisdiction is the best solution.”

Malta’s positive stance towards the cryptocurrency space began in 2013 when the MFSA approved the first ever Bitcoin hedge fund, Exante, to operate out of the country. In 2016, it created a Blockchain Committee to assess the merits of the technology before becoming a true hotbed for cryptocurrency startups.

The Malta Blockchain Summit, taking place on November 1 and 2, 2018, is set to bring together 4,000 delegates worldwide to the island. The event will feature discussions on some of the industry’s hottest trends, a hackathon and an ICO pitch.

Confirmed speakers include Schembri but also Joseph Muscat, the prime minister of Malta, Joseph Cuschieri, CEO of the MFSA, Eva Kaili, member of the European Parliament, Mike Butcher, editor-at-large at TechCrunch, Felix Petersen, managing director of Samsung Next Europe, and Jon Matonis, founder of the Bitcoin Foundation, to name a few.

The First Short Token to Bet Against the Crypto Market