Why HODL Is The Bankruptcy For Many Crypto Owners

The cryptocurrency market has lost nearly 50% of its value since its peak of US$840 billion in early January 2018, yet believers are advising to “hodl” despite the dramatic drop.

Hodl is a term derived from a misspelling of “hold” that refers to buy-and-hold strategies in the context of cryptocurrencies.

The term hodl originated in 2013 with a post called “I AM HODLING” to the bitcointalk forum in which a drunk, semi-coherent, typo-laden user named GameKyuubi rant about his poor trading skills and determination to simply hold his bitcoins from that point on, despite the serious fall that had just happened.

GameKyuubi’s rationale is as such: novice traders are likely to botch their attempts to time the market and lose money, or make less than they would simply holding onto their coin. 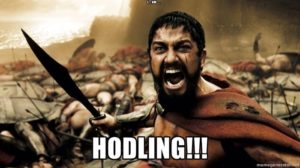 Within hours, hodl had made its way into memes and quickly became a mantra for an approach to cryptocurrency investing.

In economics and decision theory, this approach can be explained by the loss aversion phenomenon which refers to people’s tendency to prefer avoiding losses to acquiring equivalent gains: it is better to not lose US$5 than to find US$5.

The prospect theory too describes well the mindset of cryptocurrency’s most fervent believers. Basically, the idea is that people value gains and losses differently, and, as such, will base decisions on perceived gains rather than perceived losses. According to prospect theory, losses have more emotional impact than an equivalent amount of gains.

If a person were given two equal choices, one expressed in terms of possible gains and the other in possible losses, people would choose the former – even when they achieve the same economic end result.

The fact that most cryptocurrency investors have that hodl thinking is worrisome and many experts are warning of the risk of turning a blind eye on the obvious.

Vitalik Buterin, the creator of Ethereum, twitted earlier this month:

Reminder: cryptocurrencies are still a new and hyper-volatile asset class, and could drop to near-zero at any time. Don’t put in more money than you can afford to lose. If you’re trying to figure out where to store your life savings, traditional assets are still your safest bet.

According to securities regulator Joseph Borg, bitcoin is in the “mania” phase with some people even borrowing money to get in on the action.

“You’re on this mania curve. At some point in time there’s got to be a leveling off.”

Recently, a new category of startups targeting cryptocurrency investors has emerged. Over the past year, around half a dozen of new online platforms have been launched with the sole purpose of providing cryptocurrency traders with the ability to get a cash loan secured by cryptocurrencies as collateral. These include Salt Lending, Sweetbridge, MoneyToken, and EthLend.