The 2019 Global Leaders in Crypto Education

During the 2017 school year, Cornell University undergrad Joseph Ferrera wanted to learn more about cryptocurrency and blockchain, which was dominating the news amid the runup in the price of Bitcoin.

Few classes existed at the time, so he and a classmate decided to form a club for interested students called Cornell Blockchain, and they asked Emin Gün Sirer, a Computer Science professor and co-director of Initiative for Cryptocurrencies & Contracts (IC3), to advise them.

In short order, the club filled a room designed to hold 120 students. “I expected that about 80 to 90 percent of club members would be pretty geeky computer science students,” notes Sirer. “I was so incredibly wrong. I’d say at most 20 to 30 percent are from computer science, and the rest are from all across campus.”

Unlike many other new technologies — and established industries — cryptocurrency and blockchain has quickly shown its potential to reshape multiple academic and professional disciplines: computer science, legal, economics, finance, social science, the list goes on. As students from a wider and wider cross-section of majors express interest in learning about the burgeoning field, some of the world’s best universities are exploring how they can meet surging demand to sate curiosity about the technology and set their graduates up for success.

“The blockchain domain’s interdisciplinary nature makes it very different from any traditional field,” notes University of California Berkeley computer science professor Dawn Song. And so at schools around the world, legal scholars are grappling with ethics and regulatory structures, economists are exploring the potential of borderless currency, computer scientists are building new applications, and social scientists are looking at overall impact on society.

All of which is reflected in the Cornell Blockchain club. “There’s a ton of interest from the business school, the hotel management school, the medical school, even the agriculture school,” says Ferrera, who himself graduated from Cornell’s School of Hotel Administration this spring and is working as the business manager of Ava Labs, a startup founded by Cornell’s Sirer working to explore decentralized, blockchain-based payment technology. “We’ve had so many professors reach out to to learn more about blockchain and see how it applies to their field. It’s really cool to be part of a community where there’s so much engagement.” 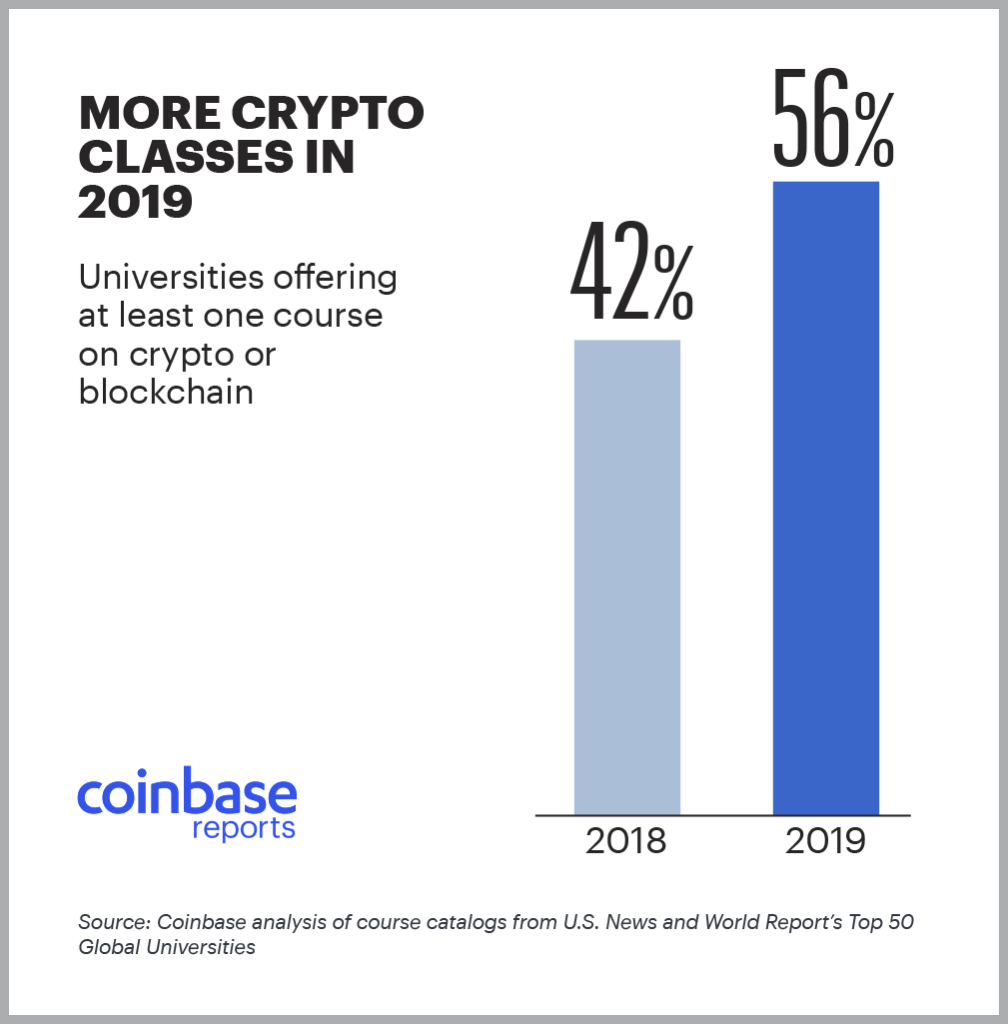 As part of our second annual study, we broadened our methodology to analyze a more comprehensive set of determining factors. To assess the current landscape of cryptocurrency in higher education, Coinbase reviewed the course catalogs of the Top 50 global universities as ranked by US News and World Report. Our study focused on classes available to undergraduate and graduate-level students in 2019 for which information was available online.

This year, 56 percent of the top global universities now offer at least one course on crypto or blockchain, compared to 42 percent in 2018

Computer science classes still are the most common, accounting for 32.2 percent. But finance, business, and economics classes collectively tally 19.8 percent, and law-school classes add another 10.7 percent. 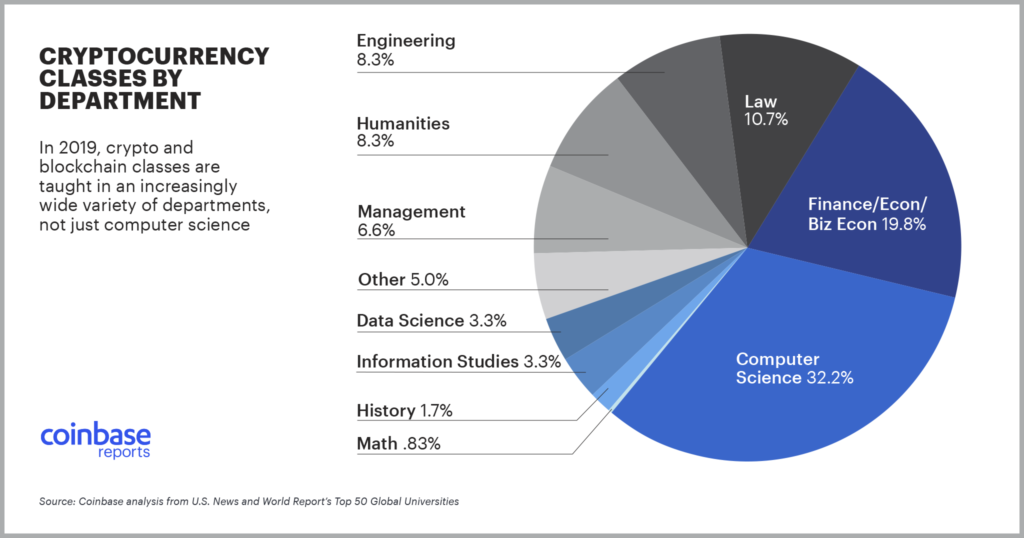 However, classes only tell part of the story of a university’s commitment to the field, so this year we also ran an analysis of non-coursework offerings like official research initiatives and student-run crypto clubs, and we also tracked research citations involving blockchain out of all 50 schools, leveraging data from Google Scholar attributions. Applying a weighting to these supporting factors (methodology detailed below) brought us to the list of Coinbase 2019 Leaders in Crypto Education. 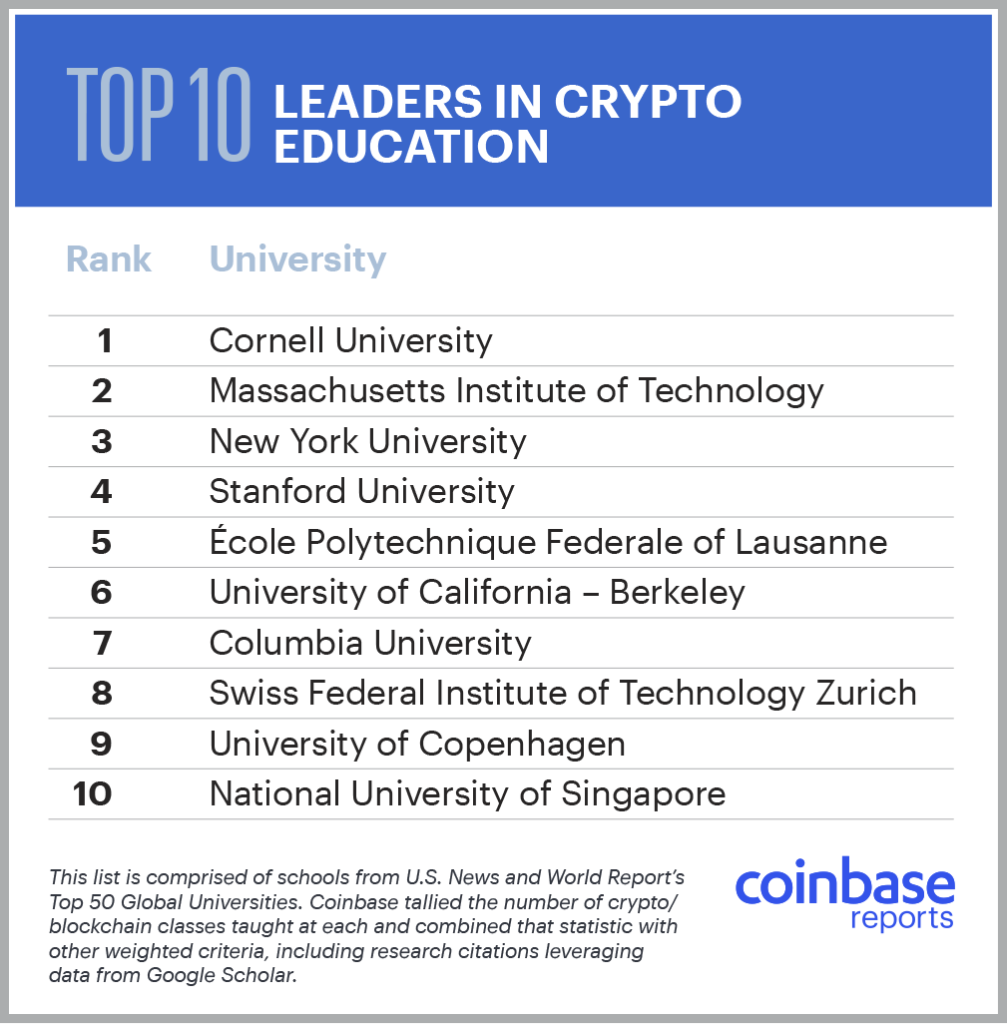 Uniting the top 10 schools on the list — which in the U.S. include MIT, New York University, Stanford, and the University of California-Berkeley — is a deep commitment to crypto and blockchain at both the student and faculty level. Cornell offers 14 classes on cryptocurrency and/or blockchain (up from 9 in 2018) and its IC3 group brings together researchers from top universities around the world.

Joining the U.S. institutions in the Coinbase 2019 Leaders in Crypto Education list are four international schools, including École Polytechnique Federale of Lausanne in Switzerland and the University of Copenhagen in Denmark. Students increasingly see fragmentation across the financial system as a global problem that needs to be solved, notes Cornell’s Sirer: “For this generation, the idea that you can’t easily send dollars around the world online is a really bizarre limitation.” 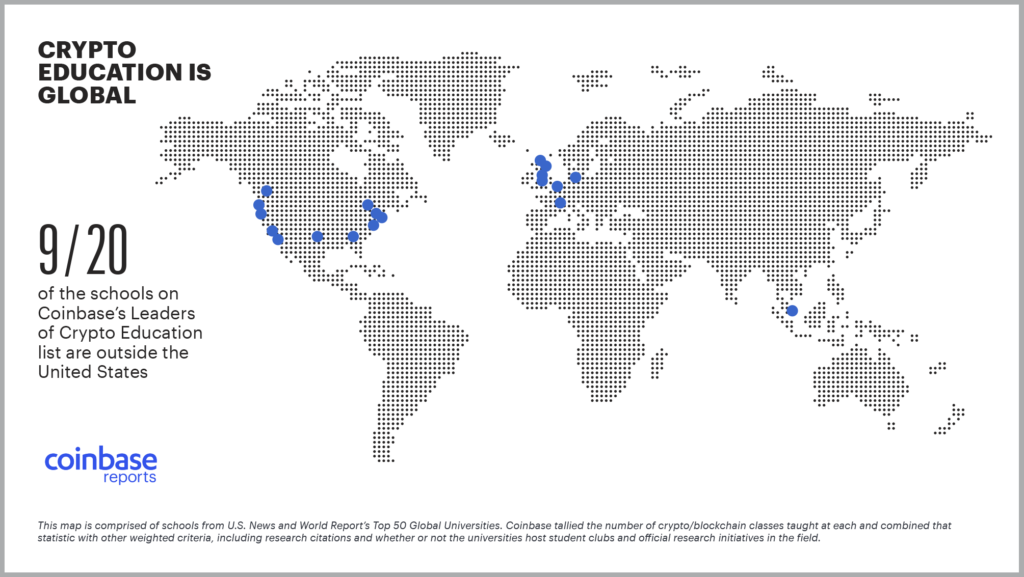 Among students, distrust in the current financial system is feeding an increasing curiosity around crypto, and it cuts across disciplines. Two-thirds of students describe the current financial system as “unstable,” “inefficient,” “unequal,” or “slow-moving,” according to a survey of 735 U.S. students age 16 and older commissioned by Coinbase and conducted by Qriously.

34 percent of students surveyed expressed interest in taking a course on crypto or blockchain, compared to just 28 percent in 2018. And twice as many (18 percent) report having taken a class on the topic, compared to the number reported from 2018.

“Definitely, some of the students interested in this topic are ones who feel mistrustful of the current banking system,” says computer science professor Cesare Fracassi, who leads the Blockchain Initiative at the University of Texas at Austin McCombs School of Business (number 13 on the Coinbase 2019 Leaders in Crypto Education list). “So they want to create an alternative system where the decision-making process isn’t centralized. Those are the more idealistic ones. Others are maybe a little more pragmatic, and interested in ways this technology can be used to improve companies’ performance and efficiency.”

For the last few years, the University of California-Berkeley has been offering a popular class called “Blockchain, Cryptoeconomics, and the Future of Technology, Business and Law.” The university is offering the class as a collaboration by three separate departments: the schools of engineering, business, and law. “On the technical side, expertise is required in things like distributed systems and software security and, of course, cryptography,” says Berkeley’s Song. “But since it’s very new technology, there are also lots of open questions about regulatory aspects. And there’s also the potential for it to lead to new business models.”

At the National University of Singapore, business students taking “Financial Regulation in a Digital Age” can learn about how technology developments including blockchain are transforming finance — and regulatory issues that need to be addressed to fully leverage the potential.

Stanford Law students taking “Blockchain and Cryptocurrencies: Law, Economics, Business, and Policy” study legal and regulatory structures “with a particular emphasis on securities regulation.” Sociology undergrads at Stanford are exploring the potential for blockchain to create a fairer economic system in a class called “Justice + Poverty Innovation.” Students learn about “how to use emerging technologies like AI and blockchain” as solutions for people navigating housing, medical, and debt.

“Entrepreneurship without Borders,” a course at MIT’s Sloan School of Management, guides students through new global venture creation, with a special focus on blockchain technology. And this fall, MIT’s Digital Currency Initiative (DCI), part of the Media Lab, is offering a Blockchain Ethics class that will bring together a wide variety of scholars, including ones from Harvard Law School.

Oceane Boulais is an MIT masters candidate who will be the teaching assistant in the Blockchain Ethics class this fall. She studied engineering as an undergrad at Florida Atlantic University, and became passionate about crypto during a summer boot camp hosted by the DCI. She compares the emerging blockchain technology to the early years of the internet. “The internet is this beautiful thing, but it’s complicated,” says Boulais. “Hindsight is 2020, so it’s really important that we start thinking about the future now.”

As digital currency and the systems that surround it are still being built, Boulais believes this is a unique moment to build the next wave of our digital future with intention. “DCI is a place where we really care about imagining what the world will be like if a distributed ledger underpins the Internet of the Future. Like who sets these things up? Who is responsible? It’s a lot of reckoning with this idea of responsibility. I think that’s really cool.”

You don’t have to be enrolled as a full-time student in an elite university to learn about crypto. MIT’s Sloan School of Management offers a six-week online course for professionals, and UC Berkeley offers a similar online class called Blockchain Fundamentals via the online learning hub edX (which also hosts classes on the topic created by the LINUX Foundation). Other sites, including Udemy, Coursera, and Udacity offer an array of courses, including Udacity’s “Become a Blockchain Developer” nanodegree program, taught by experts working in the field, and Coursera’s “Fintech Specialization” course, created and taught by faculty from the University of Pennsylvania’s Wharton School of Business.

Whether we’re talking about computer science grads seeking to build a new blockchain-based internet or business school alums looking to understand cutting-edge supply-chain technologies, one thing unites this population: passion for making an impact in an exciting new field after they leave campus.

“There’s a lot of power for students to enter this industry and help take control of it,” notes Cornell Blockchain club co-founder and recent graduate Ferrera. “If you go to a big bank or a well-established consulting firm, you kind of know what you’re going to get. With crypto you get to shape the field and become a leader.”

This article first appeared on Coinbase, All images provided herein are by Coinbase.

Industry Stakeholders Partner on Blockchain Based Margin and Collateral Solution