Bill Gates once famously stated: “we need banking, but we don’t need banks anymore”. Even though the statement might go too far in this generality/radicality, at least in the near future (what about the bank as a store of value that can be trusted?), it points to a number of problems concerning financial systems dominated by established players; one major one being that high-paid jobs at incumbents in the financial sector resulting in a tremendous waste of talent.

Active transactions, for example, maybe useful to make securities liquid (but again maybe less in a time where blockchain is around), but a large part of trading in banks ought to be considered as a zero-sum game: if the volume of transactions were reduced, society would not suffer any economic loss. In its heyday more than 10 years ago, Deutsche Bank, as a (former) extreme example of an investment bank for bright talent, spent EUR 71B on bonuses while, at the same time, “only” 19B were distributed among its shareholders. (When the share price slumped in the wake of the global financial crisis, i.e. in the wake of poor trading decisions, the shareholders finally suffered losses that were far higher than those dividends.)

In light of this situation, critical economists such as Paul Collier (in his latest book “the future of capitalism”) estimate that the incentives set by the market for the super-smart to use their rare abilities for innovation (such as startup enterprises) are far too weak, while the incentives to deploy them for securities trading are far too strong.

A lesson that can be derived from that observation is that the financial industry should be leaner – indeed, partially reflected by the ongoing consolidation process in banking (over the last 20 years, the number of banks in Switzerland went down from 440 to 283). A question that can be raised would be: FinTechs, which by definition combine innovation with financial services, are they part of the solution or part of the problem?

The answer is simple, they are both. Broken down to individual entities, we find both. For example, there are dubious blockchain firms that “improve” some part about a certain blockchain without proving or caring about the value of that blockchain in the first place for customers, businesses or the larger society. And needless to say, there also exist those good examples where user-friendliness, customization, transparency have been increased in the market (e.g. less hidden fees) or where (search) costs have been reduced (e.g. when looking for the best mortgage loan).

A more interesting and relevant question is therefore about how FinTechs can be part of the solution for fixing a financial system characterized by excesses and inefficiencies. Let’s single out four success factors.

Fintechs are also facing cultural barriers in the sense that market participants (clients, financial institutions, traders, service providers, etc.) in Switzerland are notoriously skeptical regarding innovations and reluctant to adopt new ideas which would require them to incorporate changes into their ecosystem of well established and (seemingly) well-working structures. Especially so, when the technology offered is not easy to understand and lacking transparency.

This is one reason why disruption by FinTechs is not in focus anymore, but cooperation takes center stage. In particular, whereas it was said for the 20th century that banking really is at the nexus of the real economy, we will soon move on to an era where tech clusters are really at the nexus of financial innovation. To be more precise, in 20 years there will be no more financial centers and “leaders of finance” in the world.

The financial system will be one big digital network driven by technology clusters. Then there will be some geographical centers where the big data players will be located, such as e.g. Google, Facebook, Amazon, Alibaba, etc. (resp. their successors by that time). The choice of their locations will follow criteria such as availability of qualified personnel, low taxes, political and economic stability, quality of life, energy cost and supply, availability of construction space and regulation.

My very personal view on the situation 20 years from now is that we will most likely have arrived in what I would call the “Quantum age”. Quantum computing technology will not only revolutionize the capacities and speed of how we compute but will also significantly enlarge the scope of what we can compute and that, in turn, will exercise a tremendous impact on the design of computational methods and models which I expect to foster large scale interdisciplinary research and development on methods and tools which will bring a lot of physics, chemistry and engineering approaches to Finance, Economics and the Social Sciences in general. 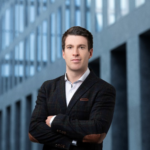 Prof. Dr. Christian Hugo Hoffmann is Assistant Professor for Finance, Cryptocurrencies and Fintech at the University of Liechtenstein as well as Senior Consultant at indivio AG in Zurich. Apart from that, he co-founded two fintechs, serves as director of Startup Grind Geneva, is a member of the Swiss Fintech Innovation Lab at UZH as well as of the Consultative Expert Group on Digital Ethics at the European Insurance and Occupational Pensions Authority (EIOPA), and regularly writes pieces on AI in leading magazines and newspapers such as NZZ, Schweizer Monat and Towards Data Science.

Seedcamp: A Bridge for European Startups for Knowledge and Capital