External forces from demographic, social, economic and regulatory phenomena have contributed to one of biggest revolution in the banking world: the emergence of challenger banks.

Digitally-focused challengers such as Atom, Fidor Bank, Mondo and Starling, have grown significantly in 2015 and 2016, fueled by changing customer expectations, the new Generation Z, the heavy smartphone use in accessing finance and emerging technologies.

Most of the innovation around fintech and challenger banks have occurred in regional hubs and heavily supportive countries and environments, according to a new report by Burnmark, including the UK and the US.

“The UK holds the first mover advantage as a home for challenger banks, but new geographies are gaining ground with support from government, regulators, investors and entrepreneurs,” the report says.

“The US, Singapore and Australia, in particular, are actively competing to create best-in-class financial innovation ecosystems and are increasingly progressive in their use of government and regulatory policy to support challenger banks.”

In early 2014, the UK Financial Conduct Authority launched the Project Innovate to support regulation for innovative businesses. Singapore has a £100m financial sector technology and innovation scheme and Australia has announced a £500m national innovation and science agenda.

The UK also leads in terms of fintech investment, having generated £524 million in 2015 compared with £3.6 billion in California and £1.4b in New York in 2015. The country has an unrivalled lead in terms of financial expertise, employing 1.2 million people in the financial services industry.

Following the UK, Singapore has been increasingly active in policy and benefits to make it an attractive fintech hub. In November, the Monetary Authority of Singapore, the country’s central bank and financial regulator, will organize the week long Fintech Festival which will bring together policymakers, fintech experts, entrepreneurs and VC to discuss the future of finance. 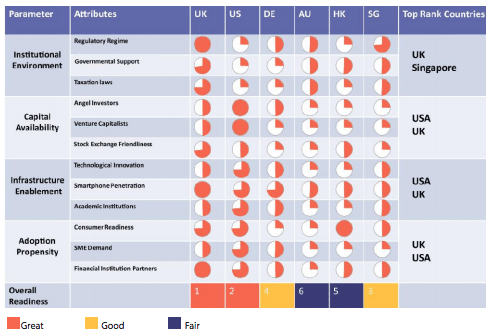 According to the report, the emergence of challenger banks are “multi-fold” and dependent on the regions they belong to. For instance, in developed markets, challenger banks are gaining prominence due to the underlying inefficiencies of the incumbents in service the customer in the best possible and transparent manner.

Emerging markets on the other hand are looking at challengers as a medium to accelerate banking innovation as well as financial inclusion. With mobile penetration increasing significantly in these locations, banks utilizing digital channels to onboard, engage or serve customers are evolving to become an important medium for financial inclusion initiatives.

Notable ventures include Abacus, a digital bank backed by a UK-based private equity firm AnaCap; Metro Bank, which implemented Backbase’s Omnichannel Banking Platform for its digital banking front-end, FIS/SunGard’s Ambit Asset Liability Management solution and outsources mortgage processing to BancTec; Monzo Bank, which has been built on open source stack including Linux, Apache Cassandra, and Google’s Go programming language; Secco Aura, which uses a distributed database similar to the Bitcoin blockchain which allows data to be stored on customer’s devices as well as the bank; and Tandem Bank, which uses FiServ’s core banking and its Agility platform on SaaS.