Germany’s Robo-Advisory Sector Is Getting Crowded

With 23 robo-advisors, Germany is Europe’s most crowded market when it comes to automated, algorithm-based portfolio management advice services. 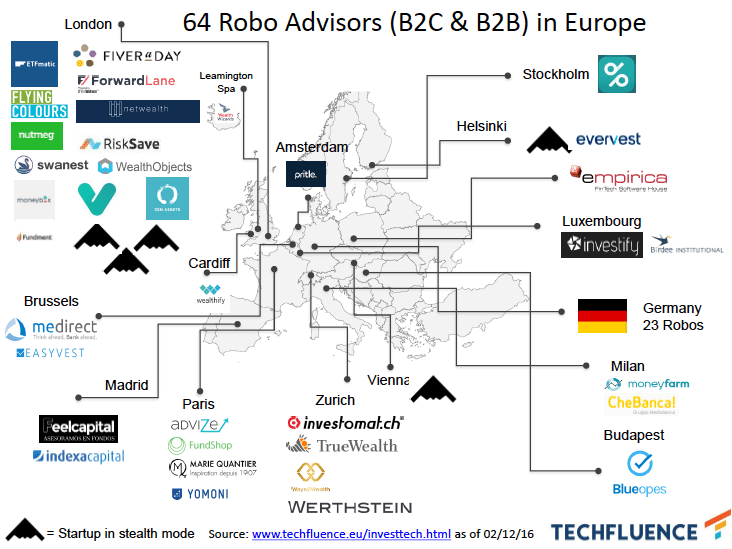 In Germany, the rise of robo-advisory has been largely fuelled by incumbents which have been deploying numerous products to serve retail investors. Notably, the launch of VisualVest by Union Investment was one of the first independent moves by one of the established institutions into the robo-advisory field.

Other examples include Fintego, a service provided by Commerzbank’s subsidiary ebase, as well as comdirect, which started offering automated portfolio advice as well.

As for Deutsche Bank, the financial institution has entered into a cooperation with FinCite to offer its maxblue AnlageFinder. AnlageFinder offers a selection of securities in the respective asset class based on criteria selected by the client, such as rating, product costs and performance.

In the space, Germany’s prominent players include Cashboard, Scalable Capital, Vaamo, and Growney, among others. 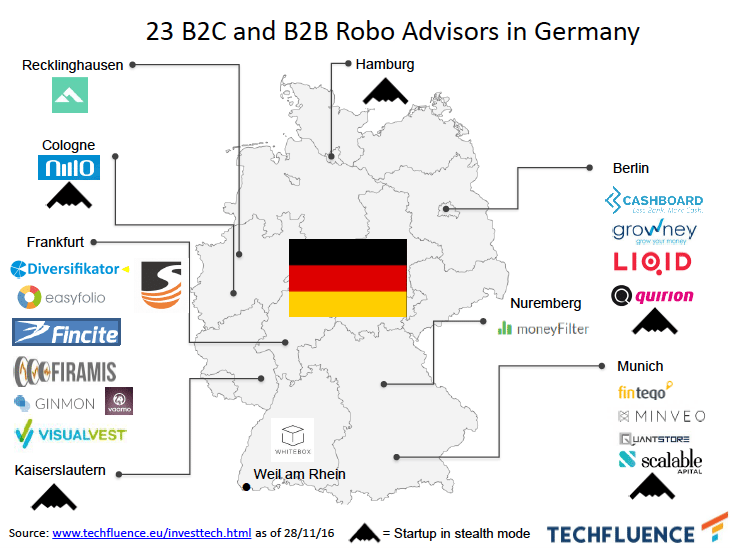 Not far from Germany, Swiss bank UBS is set to launch a new online wealth manager in Britain in early 2017. The service, called SmartWealth, will target a younger audience.

UBS is the largest wealth manager in the world, managing US$2 trillion in client assets. Initially, UBS SmartWealth will be available to a small number of UK residents.

UBS’ Shane Williams, the co-head of UBS SmartWealth, told Business Insider in a recent interview that the decision to launch in the UK was influenced by the relative high affluence of the population, favorable local regulation and the advice gap.

But the firm plans to expand internationally in the future.

“We’ll look at where the best places in the future are to go but we’ve not decided yet. But the design of the platform is there ready to move, whether that’s language or different regulatory requirements,” Williams said.

UBS SmartWealth was created especially for those who don’t meet the £2 million asset minimum of UBS’ current wealth management clientele. With £15,000, an investor can sign on to SmartWealth. Similarly to other robo-advisors, the platform culls the investor’s goals, assets and risk threshold before suggesting an investment portfolio.

One of UBS SmartWealth’s unique features is that the platform offers users a choice between an active or a passive investment approach. The active approach scours the globe for investments and strives to outperform the market. This strategy makes changes based upon UBS corporate research that includes economic and other factors. The passive approach employs lower cost UBS index tracker and smart beta funds.

As of the fees, UBS SmartWealth is set to charge 1.7%! of assets under management for the actively managed approach and 1%! for the passive one.

It took a year to build the SmartWealth platform, Williams said. Today, the team is made of 80 people based in London.

“What we tried to do with SmartWealth is to be like a fintech, to go at that pace but within a large organization,” said Williams. “It’s trying to get the best of both worlds.”

UBS is one of the numerous banks that are looking to tap into the growing popularity of robo-advisors. In the UK, still, Barclays has recently launched a digital investment product that promises lower fees than historical investment services. Lloyds and Santander UK are also reportedly developing their own robo-advisors.

UBS also formed a strategic alliance with US based Wealth management technology company Sigfig in May 2016.

5 Rising Wealthtech Stars from Singapore to Keep an Eye on