Smart Box, Big Data, robotics and contextual commerce are some of the newest concepts that could potentially disrupt the marketplace, according to a new report by Citi. 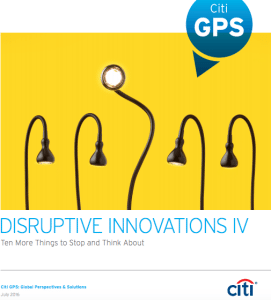 Big Data disruption: Big Data, software, and analytics are creating “seismic shifts” in the multiple sectors. The transformation will affect the entire value-chain and should make current business models in many sectors become obsolete. Greater automation and optimization through data and advanced analytics on software platforms should raise market efficiency.

Epigenetics: Epigenetics is the study of heritable changes in gene expression. Epigenetic breakthroughs are creating a tool box of powerful drugs to treat cancer and many other potential indications. Importantly, epigenetic drugs, which can switch genes on and off, may materially increase the percentage of patients likely to experience profound increases in survival in response to immunotherapy.

The future look of devices: Consumer devices will be reshaped “as thin and flexible as a piece of paper” by 2021, thanks to augmented reality and “mixed reality.” Future devices will eventually become “invisible” – using regular glasses or contact lenses as projectors to enable augmented reality. With 5G connections, storage and computing power can be stored on a cloud, thus saving components and enabling further power saving.

The smart box: Consumer media devices could be the focal point of the “connected home,” integrating a variety of services and connectivity into one location. Citi estimates that the market opportunity for the connected home in the UK could be as much as £86 billion.

Next-gen ocular delivery: New delivery methods will increase the ease and effectiveness of drug delivery for the growing number of people with ocular disease. The shift to sustained drug delivery in ocular medicine will have a significant impact on traditional therapeutic markets in ophthalmology.

Open source robotics: The surge of robot demand outside the factory, and the much wider variety of uses however has led to another development – the use of open source software to control robots. Open source robotic allows to share development costs and helps accelerate robot penetration by lowering customer adoption costs.

The importance of innovation clusters

Regional innovation clusters such as Silicon Valley, Boston, London and Stockholm, have a key role to play in fostering the ‘next’ economy. Silicon Valley is undeniably the most famous innovation cluster in the world, accounting for 52% of California’s patent registrations in 2013, attracting highly skilled people (47% of residents have a professional degree compared with 29% in the US itself) and creating over 57,000 new jobs between 2013 and 2014.

Some regions around the world are becoming particularly important for innovation in specific sectors.

In the realm of fintech, California, the UK and New York are the three largest markets for fintech startups.

The UK, in particular London, has produced some of the largest and most successful fintech companies. These include fintech unicorns Transferwise and Funding Circle.

London has become a hub for fintech for a number of reasons: its highly skilled workforce and entrepreneurial talent pool, its strong tech cluster, and its proximity to one of the most competitive financial centers in the world.

The fintech industry is employing over 61,000 people in the UK. The country also has the highest number of incubators and accelerators for the fintech sector. 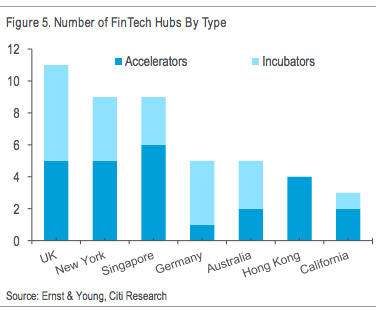