Global investment in financial technology ventures, or fintechs, tripled to US$12.21 billion in 2014, according to Accenture, a clear indication that the financial sector is poised to be disrupted by new entrants.

Global fintech investment jumped 201% between 2013 and 2014 with Europe experiencing the highest level of growth with a year-on-year increase of 215%.

But who exactly are betting on the European fintech sector? Today, we compile a list of some of the biggest investors in financial technology.

We excluded the Accelerators.  You can check out with the following link our separate list of the Top 10 Fintech Accelerators in Europe. 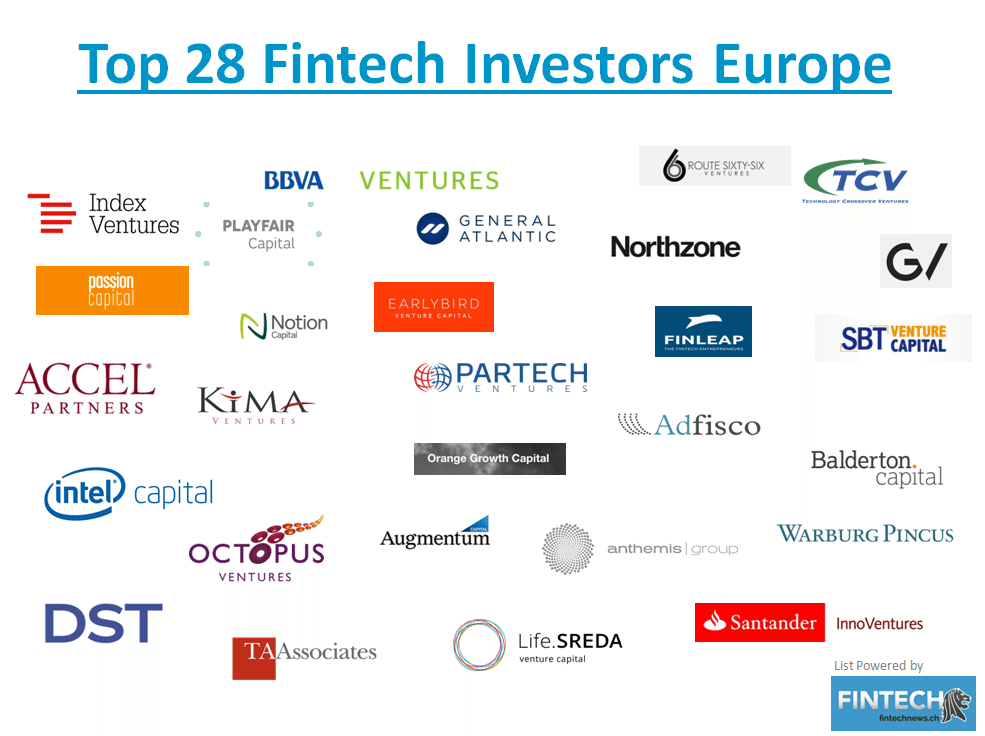 Index Ventures is one of Europe’s biggest venture capital funds with offices in London, Geneva, San Francisco, and Jersey, and is the technology arm of a larger Swiss securities firm.

Founded in 1983, Accel Partners is a global venture capital firm that invests in companies from their genesis to growth, providing funding rounds that include seed, early stage venture and later stage venture.

With offices in London, Silicon Valley, New York and Bangalore, Accel Partners has invested more than US$9 billion in companies that are tackling the technology, infrastructure, Internet and consumer services, mobile, software and cloud-enabled services markets.

General Atlantic has offices all over the world and a European presence in London, Munich and Amsterdam.

Its portfolio of fintech companies includes Adyen, Avant and Klarna.

With offices in London and Luxembourg, Anthemis Group is a leading venture investment and advisory firm dedicated to reinventing financial services for the digital world, which primary focuses on the US, the UK and Continental Europe regions.

Based in Berlin, FinLeap provides funding for bold ideas, supporting entrepreneurs who are building scalable businesses and solving real problems in the financial industry.

The fund typically invests from 0.5 to 5 million euros in seed funding and provides entrepreneurs with access to its financial network, which includes angels and industry investors.

Established more than 45 years ago, Warburg Pincus is an American global private equity investment firm that has invested more than US$50 billion in more than 720 companies in more than 35 countries around the world.

The firm is managing more than US$35 billion in assets and has an active portfolio of more than 120 companies that are highly diversified by stage, sector and geography.

Founded in 1968, TA Associates is one of the oldest and largest growth private equity firms in the world.

So far, the firm has backed 450 companies and has helped raise US$18 billion. Among its portfolio of fintech companies: BATS Global Market, BluePay, BillDesk, Smart Stream, Yeepay.com and RGM Advisors.

With offices in London, New York and Palo Alto, TCV invests in high-growth technology companies across North America and Europe, and positions itself as a long-term partner that provides financial, strategic and operational support for today’s rapidly growing, innovative tech companies.

TCV provides early stage, later stage and private equity investments into companies in segments that include Internet, business and financial services, infrastructure and software and fintech.

Based in London, SBT Venture Capital manages a fintech VC fund that invests in promising growth stage companies in the financial services industry.

SBT Venture Capital brings a solid experience in the banking industry, an incredible network of financial services companies and related technology vendors, and has as its main partner and investo Sberbank, the largest commercial bank in Russia.

SBT Venture Capital currently focuses on early-stage growth companies that are generating revenue, in need of financial/intellectual capital and access to the right network in order to rapidly scale.

With offices in Madrid and San Francisco, BBVA Ventures works with the entrepreneurs and co-investors in the US and EU, and aims to become a long-term partner in their success.

Based in Moscow, Life.SREDA is a venture capital firm focusing on investments in the fintech, mobile and Internet sectors.

Headquartered in Mountain View, Calif., with offices in San Francisco, Boston, New York, and London, GV has made 300 investments and backed the likes of LedgerX, OnDeck, Ripple, LendUp, Upstart, Plaid and CircleUp.

Alongside GV, Intel Capital is reportedly one of the largest corporate investors in the fintech startups community, according to a CB Insights report.

Intel Capital is supporting Fortumo and Storenvy, among other fintech companies, and has led iZettle’s latest funding round in August of US$60 million.

Once known as Benchmark Europe, Balderton Capital is a based in London and has been active in Europe for more than 15 years.

Focused on early stage, Balderton Capital is the largest Europe focused venture fund with funds totaling US$2.5 billion. Balderton Capital invests between US$1 million to US$20 billion into companies that have a disruptive potential and the ambition to scale globally.

Headquartered in Paris, Kima Ventures is one of the most active early stage investors, investing in two to three new startups per week all over the world.

Kima Venture invests from seed to Series A, providing founders with funding, network and support for their growth. So far, the fund has invested in over 330 startups in 24 different countries.

Launched in July 2014, Santander InnoVentures is a US$100 million fund that aims to help fintech companies grow from a very early stage to a more mature stage.

Based in London, Santander InnoVentures has invested in the likes of iZettle, MyCheck, Cyanogen, Ripple and Kabbage.

Adfisco is an advisory and investment company aimed at backing innovative financial services businesses seeking to disrupt the financial sector.

Based in London, the firm’s core activities include making direct investments in, predominantly, financial services companies, as well as providing advice to these companies.

Adfisco has been an early investor in Funding Circle, Small World and Ebury.

Passion Capital is a London-based venture capital firm that does seed and early stage venture investments in sectors that include e-commerce, transaction processing and analytics.

The firm is committed to fostering an ecosystem of technology, collaboration and executional excellence in Europe.

Passion Capital has invested in the likes of Coinfloor, Flattr, GoCardless and Mondo.

Northzone is a venture capital firm that has invested in over 100 tech companies. The firm has offices in London, Oslo, Stockholm, Copenhagen and New York, and looks for teams that are “reshaping the world with creative solutions to real problems” and is particularly interested in globally attractive markets.

Part of Octopus Investments Ltd., Octopus Ventures is based in London and has helped raised £430 million to date.

The firm has backed a number of financial services startups including Calastone, CurrencyFair, Elliptic, Mi-Pay and Seedcamp.

With offices in Paris, Berlin and San Francisco, Partech Ventures is a transatlantic venture capital firm that invests from US$200K to US$M in tech companies from seed to growth stage.

Partech Ventures has made over 300 investments so far with more than 70 exists above US$100 million.

The firm is an investor in Xfers, Kantox and Auxmoney.

Augmentum Capital is a fintech-focused fund – mainly Series A and B – that is looking for established fast growing UK and European businesses in the financial technology sector.

Based in London, Augmentum Capital backs the likes of Zopa, Borro, Interactive Investor, and Seedrs.

Founded in 2011, Playfair Capital is a London-based early stage fund backing founders building businesses that are changing the way people live and work.

The firm also operates a co-working space in London, Warner Yard, which is home to a dozen of early stage tech startups, the London outpost of the Techstars accelerator, and a collaborative angel and institutional investor floor.

Playfair has backed companies across the UK, Europe, the US and Africa, and its fintech portfolio includes Stripe, Duedil and Oradian.

Based in London, Notion Capital invests in fast growth B2B Cloud and SaaS companies in Europe at seed and Series A stage.

Earlybird is an international venture capital firm that invests across multiple stages on companies that have the potential to reshape markets.

Earlybird invests between 250,000 euros and €10 million, in a dozen of startups every year, and has raised €700 million to date.

Orange Growth Capital (OGC) is a fintech-focused investment firm founded in the summer of 2013 that fund growth companies primary in Europe, the Middle East and Africa.

OGC has offices in London and Amsterdam, and typically invests between 250,000 euros and €10 million per round.

And we should not forget at least to mention the first Swiss Fintech Investment Company. Next Generation Finance Invest, founded in 2009, was a Swiss based and listed investment company focusing on fintech in Europe. After Luminor Capital, a Singaporean fund, became main shareholder in 2014, NextGFI is active as a private company under the brand Ayondo Holding. NGFI holds investments in companies such as Gekko, Oanda, Ayondo and Stockpulse.