SMEs, which are lacking the scale of large corporates and firms, often have to support excessive fees when it comes to currency exchange and international payments.

Amnis’ mission is to allow for SMEs to settle foreign exchange transactions on the same terms as large companies, while being fully transparent regarding its fees, according to co-founder Michael Wust.

Unlike traditional players, Amnis determines its fees not based on the amount of each transaction, but based on the annual foreign currency exposure. This starts at 0.4% and decreases based on volume to 0.2%.

The secret behind Amnis is that the system functions on a peer-to-peer model instead of having to rely on a traditional intermediary such as a bank. 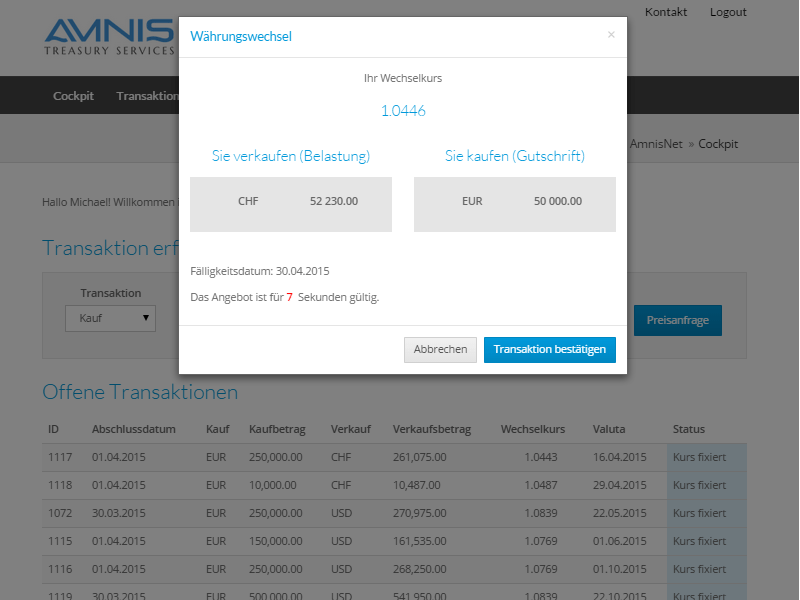 Founded in 2014 by former bankers and financiers Michael Wust, Philippe Christen and Robert Bloch, Amnis follows the lead of the likes of Kantox, TransferWise, Midpoint, MoneySwap and CurrencyFair, which were all born out of the idea of disintermediating banks from the foreign exchange process. This model allows for reduced costs and administration time for clients.

Kantox, a London-based startup, provides similar services to businesses. Authorized by the UK Financial Conduct Authority (FCA), the company has served some 2,000 clients who have exchanged over US$3 billion in 20 countries. Kantox has raised over US$21 million in funding so far.

UK P2P firms TransferWise and Midpoint, too, are authorized by the FCA. Both launched in 2013.

CurrencyFair, which started in Ireland in 2009, allows individuals and businesses to exchange currencies and send funds to bank accounts worldwide. CurrencyFair is registered with the Central Bank of Ireland so it comes under the European Communities Payment Services regulations. CurrencyFair Australia Pty Ltd is regulated by the Australian Securities and Investments Commission. The company has raised over US$24 million in funding so far.

MoneySwap, one of the first services that launched in 2009, is regulated by the Hong Kong Customs and Excise, the FCA in the UK, and as a Small Payment Institutions. The company is headquartered in Hong Kong with a UK-based sales and marketing team.

Amnis’ P2P currency exchange solution was only the first step for the company as it plans to develop and offer other services, including a cash management solution for SMEs. Speaking to Netzwoche, Wust described this as an “electronic treasurer,” which would basically provide the same services as the ones provided by treasury departments in large companies, but at lesser costs.