Though challenger banks have attracted a collective customer base of over 200 million customers, many of them are still not profitable, according to a new research by Amsterdam-based Fintech Consultancy Group (Fincog) which analyzed over 150 challenger banks worldwide.

Fincog, which performed a benchmark on a selection of leading challenger banks internationally including Revolut, Monzo, Monese, N26 and Bunq from Europe, found that all of the region’s top neobanks have negative profitability.

In the region, UK-headquartered Monzo was found to be the biggest loser, with a total net loss of US$58 million in YE (year ending) February 2019, or a US$18.71 loss per customer.

According to the research, these large losses are mainly driven by the challenger banks’ low level of income. In the group, Bunq achieve the highest income per customer at US$19.72, followed by Monzo at US$3.63 per customer, and N26 at US$0.31 per customer. Meanwhile, Monese records a negative income per customer of -US$1.02. Data for Revolut was unavailable. 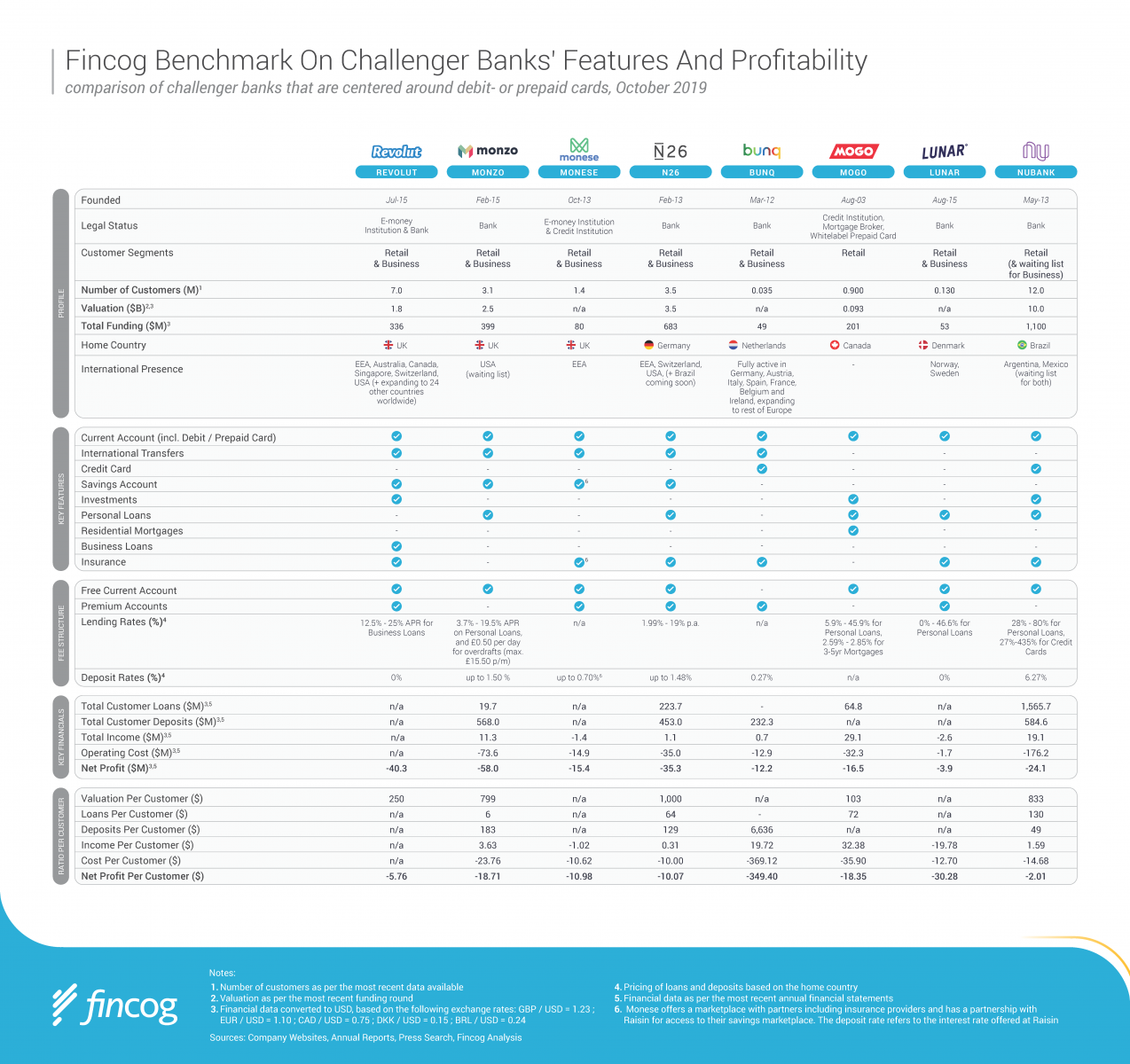 Challenger banks’ low level of income can be explained by their pricing, which is often very competitive with very thin margins. This has been one of their core value proposition. Another explanation can be their relatively large customer base of inactive customers, many of whom use their services to as secondary accounts. The report also notes that these challenger banks all offer sub-set of banking services, which limits their revenue potential.

In comparison, incumbent players have extensive ranges of financial services and larger customer balances, which, in the case of Lloyds Banking Group, one of the UK’s largest banks, for example, has allowed it to achieve a profit of US$180 per customer, despite the much larger operational cost of US$335 per customer.

Much as earlier tech giants, challenger banks have prioritized growth of customers over profitability. The assumption here is that they will eventually capitalize on their large customer base at some point.

Revolut, for example, has reportedly been looking to raise as much as US$1.5 billion to fuel its global expansion plans. The company operates in 32 countries but its partnership with Visa has taken that total to 55, and in October, it launched in Singapore, marking its entrance into the Asian market. But Revolut’s rapid growth has come at a price. In February, a Wired report revealed the human cost of the company’s rise, highlighting toxic workplace behavior and high employee turnover.

Meanwhile, N26, the highest valued fintech company in Europe, offers its services throughout most of the Eurozone, the UK, Switzerland and the US, and is expected to start operating in Brazil soon. And Monzo made its US debut this summer.

But challenger banks must compete with existing banking institutions which enjoy a large clientele and extensive product portfolios, and with churn rates being rather low in the banking sector – typically around 2 to 5% per year – this might be harder than it looks.

Still most challengers are relatively early phase, and have yet to establish their foundation with sufficient economies of scale to be better positioned for profitability.

“Surely not all will survive, in fact we already have witnessed the end of various players, such as Hufsy (Denmark) that recently ceased operations,” the report concludes.