Wirecard, a leading payment service company, launched its mobile payment solution for customers in Switzerland as part of its planned global expansion.

Boon an iOS-based mPayment application, was previously limited to the United Kingdom and France. After establishing a strong market share in both countries, they chose Switzerland as its third market before expanding to the rest of its targeted European nations (Germany, Austria, Netherlands, Belgium, Ireland, Spain).

“Our intention is to offer an unparalleled mobile payment experience to even more users. By launching boon with Apple Pay in Switzerland we are taking another step forward, bringing mobile payment to the next level through enhanced user-friendly experiences, leveraged by innovative, safe technology,” said Georg von Waldenfels, executive vice president of consumer solutions at Wirecard.

Based upon a virtual prepaid MasterCard, Boon. allows customers to top-up their accounts via debit or credit card. The paired iOS app enables the handset to make digital payments at any establishment with NFC (near field communication) point-of-sale terminal that accept MasterCard payments. 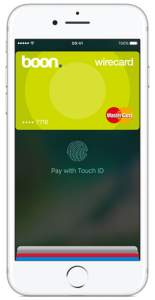 The mPayment service offers customers a convenient way of conducting payment transactions in real-time via their handset or smartwatch even without any cash or a credit card. It also offers users an overview of the whole payment through an app.

Boon.’s greatest feature is its compatibility with Apple Pay, which only launched its service in Switzerland mid-last year.

Prior to Wirecard, other digital payment systems including Swisscard, Cornèrcard, and Bonus Card had all featured Apple Pay in the country.

However, Wiredcard has a bigger competitor in Circle, an innovative virtual payment service provider. The company partnered with Apple in developing iMessage as a new platform for sending and receiving payments. Customers using iOS 10 will be able to send US dollars, euros, pound sterling and Bitcoin payments to anyone via Apple’s text messaging service.

Circle’s Chief Executive Jeremy Allaire said that they are developing their infrastructure to support what he called “an app-less experience” where people will be able to make or receive payments in different ways and not just within one monolithic app.

This is perfect timing considering that experts foresee SMS regaining its market value in 2017. In addition, O2 also mentioned that unlimited text messaging as well as free calls have now become regular features on most mobile plans, even the most basic ones.

While Wirecard hasn’t explored iMessaging as a mobile payment platform, the company guarantees that Boon. will be able to offer Swiss customers a secure and safe service for payments while continuously receiving all the benefits and rewards offered by their credit and debit card provider.

At present, the Boon. app is compatible with all iPhone devices with a built-in Apple Pay service including the Apple Watch.